As the year rapidly comes to a close, we want to thank all of our readers and Social Media Friends, Associates those of you just curious to know what in the world are they talking about over there.

On 11/11/11 WCNTV turned the corner as we declared Jubilee over the world.  The fruits of our labor will become more and more clear as we do WELL IN 2012.

MAY YOU ALL FIND HAPPINESS AND JOY DURING THIS HOLIDAY SEASON 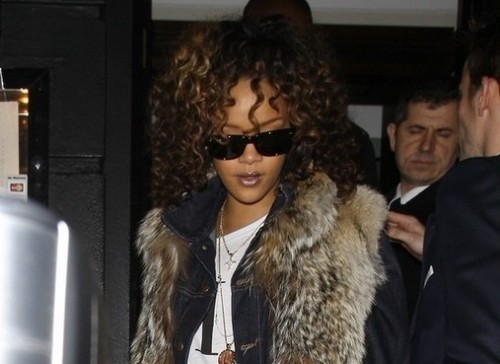 Your best source for all the latest Rihanna news, pictures and a lot of usefull information. Come to the place where all Rihanna fans meet!
Via rihannadaily.com

ri(a)-na\ as a girl’s name is a variant of Rhiannon (Welsh), Riane (Irish) and Ryan (Irish, Gaelic), and the meaning of Riana is “great queen, or goddess; king”.

HOT HOT HOT, RIHANNA’S IS ON THE RISE, She is HOT as Fish Grease and is becoming a Global Transmedia ICON.

RIHANNA’S “S&M” POWERS TO THE TOP OF THE CHARTS!!

in Submitted by roc_nation on Apr 20

Rihanna made Billboard history as the first artist ever to have a lead single go #1 after her 2nd single What’s My Name? ft. Drake went #1 on the Hot 100.  Now the S&M remix featuring Britney Spears has hit the top of the iTunes chart, giving Rihanna her 10th #1 hit!  Congratulations to Rihanna and thank you to all the fans for their never ending support!

Birth Name : Robyn Rihanna Fenty
Nickname : RiRi, Caribbean Queen, The Barbados Babe
Height : 5′ 10″ (1.78 m)
Mini Biography
Rihanna was born in a county in Barbados called St. Michael. She lived the life of a normal island girl going to Combermere, a top sixth form school. Rihanna won numerous beauty pageants and performed Mariah Carey “Hero” in a school talent show. Her life changed forever when one of her friends introduced her to Evan Rodgers, a producer from New York who was in Barbados for a vacation with his wife, who is a native. Rodgers arranged for her to go to New York to meet Jay-Z, CEO of Def Jam Records. He heard her sing and knew she was going to be incredibly successful. She was 16 when she was signed to Def Jam. Since then, she’s amassed phenomenal success.
Trade Mark
Leather outfits
Ever changing hairstyles
Bright red hair
Silky tone of voice
Bajan accent
Trivia

Was signed to Def Jam Records
Her musical inspirations include Alicia Keys, Beyoncé Knowles, and Mariah Carey.
Attended Combermere which is a sixth form school similar to technical school in America.
Performed Mariah Carey’s “Hero” at her school’s talent show.
Won a beauty pageant at her school.
Born to a black Barbadian father Ronald Fenty and a black Guyanese mother Monica Fenty.
She has two younger brothers Rorrey and Rajad.
Stated in an interview that her friend and former Island Def Jam record label artistFefe Dobson was someone that she admired and looked up to. Having a fellow black artist writing, singing, and performing the music she truly loves.
Ranked #8 on the Maxim magazine Hot 100 of 2007 list.
Sampled “Wanna Be Startin’ Somethin’ ” by Michael Jackson from his “Thriller” album in her song “Please Don’t Stop the Music“.
Ranked #15 on the Maxim magazine Hot 100 of 2008 list.
According to Fashion Lifestyle she’s had over 150 hairstyles since her music career took off in 2005. Her trademarks are her Long Straight Brown (2006), Medium Length Black Bob (2007) and Short Cropped look (2008).
Made an estimated $15,000,000 in 2008. (Source) – Forbes Magazine.
Was tagged “The Digital Download Queen” due to her songs being downloaded over 75,000,000 times combined.
Has sold over 12 million albums worldwide in under 4 years. [September 2009].

Her 3rd studio album ‘Good Girl Gone Bad’ (2007) was the 3rd highest selling album in the world in 2007 and was the 8th highest 2008. It has sold just under 8 million copies worldwide and has spawned 3 number one Hot 100 hits and 2 worldwide number ones.
Appeared on the cover of Italian Vogue for there “Extreme Couture” edition. [September 2009].
Her ex-boyfriend, Chris Brown, was sentenced to five years of probation, six months of community service and one year of domestic violence counseling as a result of his attack on her in February, 2009 [August 29, 2009].
Is good friends with Katy Perry.
Her 3rd single ‘Rude Boy’, from her 4th studio album ‘Rated R’, became her sixth US number one single. This makes her the most successful female artist of the last 10 years.
She and then-boyfriend Chris Brown canceled their performance at the Grammys in February 2009 just hours before the show started after Brown was caught up in a late-night domestic dispute, which later turned out to be a physical attack on Rihanna.
She’s the highest paid female celebrity to sit front row at fashion shows. She’s paid an estimated $100,000, followed by Beyoncé Knowles, who is estimated at $80,000.
Is a big fan of The Prodigy and Chase & Status. She worked with Chase & Status on her album “Rated R” after calling member Saul Milton up at 3 AM.
Selling 62 million records since 2005, she’s the most successful artist over the last decade. She also is the first ever artist ever to have 5, 3X platinum selling digital singles.
Broke her own record by scoring her 7th US number one. “Love The Way You Lie” with Eminem became her 7th number one single in 5 years. This gives her the most number ones from an artist in the last 10 years.

Has attained nine number one Hot 100 singles. Three of them were achieved in 2010. She become the only female in American history to have her first single to go number one after the second. [February 2011].
In the UK, she became the only female; and the only artist in 52 years to have three top ten songs at once on the ‘UK Official Chart’. She also became the first female artist; in the history of the chart, to have a number one in five consecutive years.
She has Seven number one singles in Australia as of Febuary 2011, making her the only non Australian artist to do so in the last 20 years.
Her 5th studio album ‘Loud’, sold 2.8 million copies worldwide in 3 months.
The album also marks the launch of her business “Rihanna Entertainment”[Febuary 2011].
Billboard named Rihanna the Digital Songs Artist of the 2000s decade.
Is worth an estimated $143 million. [Forbes Febuary 2011].
Her controversial music video for “S&M”, was banned in 11 countries within a day of it’s release. This is Rihanna’s second video to cause controversy as “Te Amo” was banned in many countries due to its same-sex nature.
As of March 1st, she’s reached over 1.2 billion YouTube views on her official Vevo page.
Q Magazine named her one of the top 100 acts of the last century. [November 2009].
Became the youngest black female to grace the cover of American-Vogue [March 2011].