WCNTV Commentary:  This is a great article making for the introduction of Transmedia Brandcasting to provide instant merchandising for Advertisers and a Invitation into the Transmedia Relationship between the Artist and the Fan.    Viewers are tired of subsidizing 30 Second commercials and reruns.  Its time for IPTV and the Love It, Click it & Buy it Technologies that will faciliate global merchandising from streaming video. Remember you heard it here first.  Jay O’Conner Chairman & CEO WCNTV

Television advertising has undergone significant changes in the last 30 years. However, it is arguably on the verge of its greatest changes ever. From where I sit as the Global Head of Digital at PepsiCo Beverages, charged with navigating our brand’s foray into the digital world, I see three big changes:   –The value we put on an advertisement will change as we seek to account for engagement metrics in the pricing. –The narrative arch will change as we think of the advertisement as a trailer versus the whole story. –Location-aware technologies will force a greater degree of engagement on a format that had historically been passive, impersonal and certainly without any extensions.   When you look at the statistics, the reasons are obvious.

According to a recent study, 60% of television viewers also look at their mobile phones while watching TV shows. 33% have their laptops open in front of them and most interestingly, iPad owners spend the most time in front of the TV with their tablet than any other activity. It makes sense for TV advertisements to be thought of as an element in a broader narrative arch for the brand – a narrative arch that allows the brand to tell a more complete and a more interactive story. But what are the implications for marketers today? I see six key changes.

1. In the future, no television advertisement will be just self-contained narratives designed to entertain, inform, educate or remind consumers about products. Their role isn’t going to be about building brand recall, favorability and awareness in that moment alone. They will be trailers into deeper branded digital experiences. When TV ads become teasers for digital experiences, the ROI on the investment will improve significantly as the digital experience will stretch out the brand experiences beyond the 30 second clip. The ROI won’t be measured by the impact that the TV ad has when it’s aired but also by its residual influence on engagement in other mediums in the weeks that follow the airing. We saw a good example of this with the Pepsi Sound Off platform that was launched to fuel conversations around the X-Factor TV show.

2. Fewer and fewer advertisers will start their strategic marketing planning with a television advertisement in mind. Instead, they’ll step back and begin with an engagement strategy that gets operationalized through a series of creative ideas that then get routed through different channels. We saw this with the most successful Super Bowl ads like the Volkswagen ad, which was launched online the preceding week, and the Mercedes advertising, which was driven by their Tweetrace engagement program. We’ve also seen it with Best Buy’s Twelpforce where TV was used to promote the powerful and award-winning digital engagement program.

3. Location-based digital experiences will be the new driver of television advertising. Back in July, Pepsi ran television advertising that was all about celebrating that summertime is Pepsi time. The ads ended with a call-to-action encouraging people to check-in at summer locations like beaches and amusement parks for exclusive content and to get the Pepsi Summer Time Badge on FourSquare. The badge became FourSquare’s most popular brand badge ever and the tight TV, web and mobile integration drove its popularity. As marketers look to get stronger ROI from their TV investments, location-based programs linked to the TV advertisement will come to the forefront. These will matter as they can track the user all the way to the store shelf.

4. Media planning will change, as social signals will heavily influence media-planning decisions. With technologies from companies like Blue Fin and Networked Insights, I now know which TV shows (and which Pepsi ads) triggered the most social engagement online. I also know which TV shows were most engaging for Pepsi consumers specifically. You can bet that information will heavily influence planning decisions in the future. In fact, I’ll go so far as to say that in the future the metric GRP (which stands for Gross Rating Points and which accounts for reach and frequency) will look something like a “GRPE” with the “E” meaning “engagement.” capturing how social a particular TV show is. As advertisers, we will place a premium on shows that have a high “E” component.

5. Being ready for digital participation in real-time becomes the new imperative for marketers. They’ll need to structure around that. Whether it’s the Super Bowl or the VMAs, as marketers run television advertising, they need to be ready for the real-time response and the real-time marketing opportunities for deeper digital engagement. When Beyonce showed her pregnancy during the MTV VMA’s, that was a real-time moment. It lit up the web with conversation and savvy brands jumped on the buzz to promote related products and services. This will soon become common for all marketers.

6. Reflecting digital culture through television will become a priority for brands. Increasingly, consumers care most about items like what’s trending in pop culture, what’s about to become really important, and what music, entertainment, sports or celebrities they need to care about. All this typically breaks online today. Reflecting that and sharing it with wider audiences in ways that correlate to the brand’s objective, is going to become a new role for TV advertising. It’s going to give street credibility to the brands. It’s going to start with those 15-second spots but soon all advertising will cover this.   These are indeed exciting times and not just for the networks that try to brandish their digital credibility, but also for savvy marketers who suddenly are discovering that the world doesn’t start or end in a 30 second spot. The TV spot has become the trailer for something bigger, broader and more interactive.
Via blogs.hbr.org

If You Build It Awesome…They Will Come by Elias Shams – WCN Transmedia Group Featured Awesomize.me Business

If You Build It Awesome…They Will Come

Minus the “Awesome” part, this was the line from the 1989 classic movie “Field of Dreams” that inspired me to become a risk taker and an entrepreneur that eventually drove me to build telezoo.com in 1999 and awesomzie.me in 2011. Certainly people are coming… I’ve included a few of them all the way at the end of this article:

Now we all know that times are tough and the economy is in the dumps with our current unemployment rate of 9.2%.  To date, no one has come up with a solution.  So to paraphrase President John F. Kennedy – “Ask not what your country can do for you, ask what you can do for your country”.

The way I see it – the only way to fix the economy is jobs, and the burden for creating jobs and getting this economy rolling, is ours, the entrepreneurs. Only we can make this happen!  Forget about taking the big company paycheck, they will lay you off soon enough just to meet Wall Street expectations and pocket the change.

If even 20% of us make it, that’s good enough for the nation and of course the rest of the world! Look at the employment opportunities Apple with their iPhone and iPad, Google with Android, and Facebook with their social network have created all over the world. That’s not even counting the countless firms that have been growing as a result of the emergence of these firms (e.g., Zynga, FourSquare, etc.)  Although, my awesomzie.me has not created thousands of jobs yet, it has done its part in adding four jobs since its launch date earlier this year – a pretty good start.  So if you build it – they will come.  Whatever ideas you have in mind, bring’em on!

As a reminder, historically, when the economic climate is tough, it has been a great time to start a business – no one is hiring so hire yourself!  In fact, 16 of the 30 companies that make up the Dow industrial average were started during a recession or depression. These include Microsoft,  McDonald’s, General Electric and others.  Each time we hit a tough economic patch – a new industry emerged as the engine for all our growth – be it cars after the depression, computers and technology in the 80s or the emergence of Google after kicking ass during the 2001 recession.  But for them to come, you must build it. So, again, you got an idea, bring it!

As for my “field of dream”, awesomzie.me, first let me give you my 2cents on this whole internet -> Search – Social Media evolution that gave me the idea to build it:

i) Early 90s:  WWW was born…
ii)  By mid 90′s:  millions of sites popped up on the Web…
iii) Mid – late 90s: Yahoo & Google were born to help us to find the right information of the right pages on the Web…
iv) Early 2000:  Social media was born…
v) Late 2000:  Millions of pages created by people, companies, and organizations on all these social media channels.

vi) 2012 and beyond.. the days of just setting up a website or blog to promote yourself, your talents, and even your business, by creating a page for them on Facebook, LinkedIn, and Twitter are O-V-E-R!. Your social media pages and sites should be on a place where the vast number of users and communities can easily find you, learn about you – AND – express their opinion/rate you and your goodies. If you are confident you are selling something awesome, you need the power of the crowd to promote you (and your company) anyway.  So come on take the first step – Build it and they will come.

Here are several awesome users on our site. Click on each page and check out the links on the left hand side and their ratings on the right. Feel free to awesomize them: 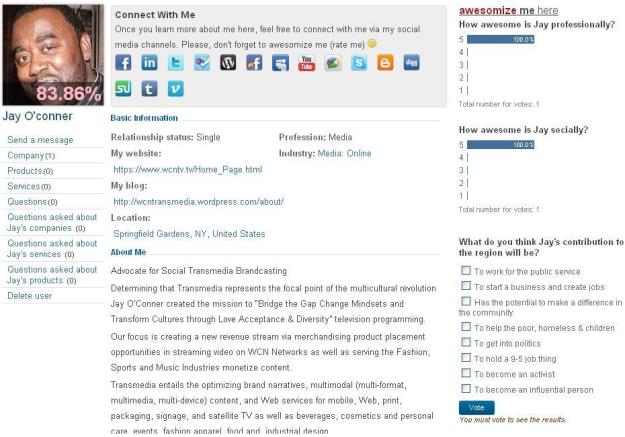 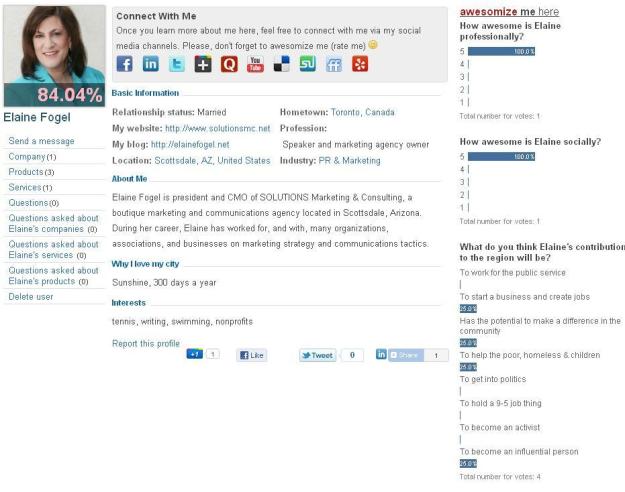 All that being said, you’ve heard my story –I look forward to hearing yours. If you have an idea and not sure whose door to knock on for investment or are in need of some mentorship, feel free to create your page on awesomzie.me, show me how awesome you are, then drop me a note via my profile. Do you see the trick here? You scratch my back and I will scratch yours J  I have built it, now will you come?

Feel free to connect with me via awesomize.me

About Elias Shams
I have been a serial entrepreneur in telecom and social media space for past 12 years or so. I hold a M.S. degree in Telecommunication Engineering from the George Washington University and a B.S. degree in Electrical Engineering from the University of Maryland. I’ve lived and worked in many countries and cities including London England, Tehran Iran, Bonn Germany, Paris France, Alicante Spain, Delhi India, and my favorite of all Washington, DC of great US of A. Two of the greatest Washington, DC based companies I worked for and very proud of are Yurie Systems which was sold to Lucent in 1998 for $1.23 B and telezoo.com that I founded in 1999. I am currently the founder and awesomizer @ awesomize.me

Notify me of follow-up comments via email.

Notify me of new posts via email. 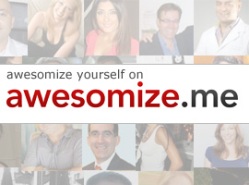