@WCNTV predicts Tubemogul to be a major force in Video Content Monetization. Download the TubeMogul Video Ad Playbook and be in the know.

@WCNTV predicts TubeMogul to be a major force in Video Content Monetization.  Download the TubeMogul Video Ad Playbook and be in the know.

TubeMogul is the only video marketing company built for branding. By integrating real-time media buying, ad serving, targeting, optimization and brand measurement into its PlayTime platform, TubeMogul simplifies the delivery of video ads and maximizes the impact of every dollar spend by brand marketers. Over half of the Fortune 500 use TubeMogul to simplify the delivery of video ads in any format, optimize the impact of their brand message and maximize the effect of every dollar they spend.

Founded in 2006, TubeMogul is based in Emeryville, CA with offices in New York, London, Chicago, Los Angeles, Toronto
and Sydney.

CHART OF THE DAY: Google Is Spending Billions On Data Centers 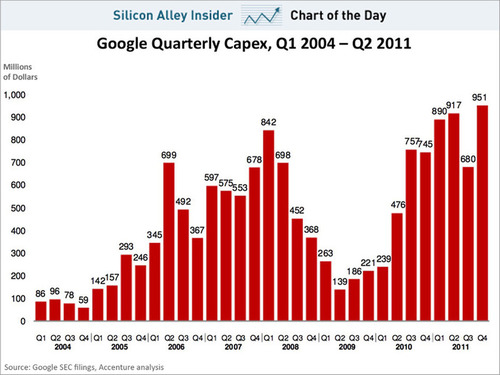 A huge advantage….Google is under attack from a lot of different directions.

Facebook, Twitter, and other social networks are collecting data about users and their relationships that Google doesn’t have. The smartphone explosion means that more people are getting info from apps, which could drive them away from Google’s Web services.

But Google does have one big edge: its data centers are the most numerous, most advanced, and most efficient in the world. That means that Google can deliver online services at massive scale and lightning-quick speed, even as the total number of Internet users explodes thanks to smartphones.

This chart, which was compiled by Accenture, shows Google’s total capex spend by quarter since 2004. Not all of this money is going to build new data centers, but a lot of it is. After a brief gap during the recession, Google is spending more than ever before. Smaller companies like Facebook can’t come close.

The Future Of Data Is Sneaker Optimization – 03/27/2012…Two major data stories seem to have taken center stage over the past few weeks. The first is the transformation of everything imaginable — and I mean everything — into a source of actionable information. The second is that we’re finally starting to wrap our heads around syncing measurement across traditional and digital channels.

These are both obvious points. But taken together, they’re revolutionizing what cross-channel data and metrics are coming to mean. 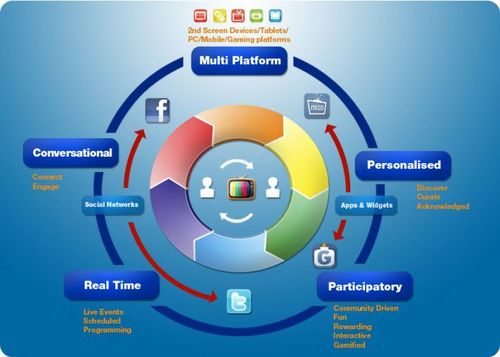 Just weeks before the upfront, you might be wondering which networks are looking good — and, better yet, which ones have both traditional and digital video plans.

Seems that everyone can claim something good. Fox still has the top-rated show, “American Idol,” but it might not end the season at number one. CBS is still the most consistent performer. NBC now has “The Voice,” but lots of trouble everywhere else. And ABC has some surprisingly good new shows, “Once Upon a Time” and “Revenge.”

TED Profile…Jay O’Conner leads WCN which is a new breed of strategists and technologists serving advertisers and agencies who create superior customer experiences across multiple platforms, using video as the medium. As many know, the brand experience must remain a essential component of your marketing communications. Measurable success is based on creating suitable memorable entertainment properties.

Jay has spent the last 10 years in the WCN Think Tank studying technology and the convergence of television.