Obama Protesting at Harvard in 1991 Watch how a President is Born.

Posted by wcntransmedia on March 7, 2012
Posted in: Uncategorized. 1 Comment 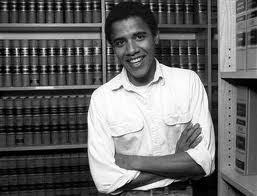 @wcntv commentary. If you love history and how a President is born examine his roots. Totally inspriational love him or hate him.  You gotta respect him as THE PRESIDENT OF THE UNITED STATES OF AMERICA.  ROCK THE VOTE.   Barack Obama in a 1990 video at Harvard protests in favor of the cause of Professor Derek Bell and the hiring of more minority faculty members.   Andrew Kaczynski of Buzzfeed discovered this little gem of a video, in which then-law student Barack Obama spoke at a protest in favor of Harvard Law Professor Derrick Bell.   Kaczynski explains what the protest was all about. Bell was the first black tenured professor at the school, and a pioneer of “critical race theory,” which insisted, controversially, on reading issues of race and power into legal scholarship. His protest that spring was occasioned by Harvard’s denial of tenure to a black woman professor, Regina Austin, at a time when only three of the law school’s professors were black and only five women. He told Harvard he would take a leave of absence — a kind of academic strike — “until a woman of color is offered and accepted a tenured position on this faculty,” and he launched a hunger strike to dramatize his point. Obama was a major figure on campus, the first black president of the Law Review. Some friends, in a prescient joke, just referred to him as “the first black president.” He had a reputation as a conciliatory figure, not a confrontational one like Bell.   Probably the most amazing thing about it is the fact that Obama’s speech-giving style is so little changed since his days at Harvard. Obama has the same soaring cadence, dramatic pauses, and light-hearted jokes that you find in almost every one of his speeches. Here’s the video:   Read more: http://www.businessinsider.com/this-1991-video-of-a-harvard-protest-shows-barack-obama-has-always-given-great-speeches-2012-3?utm_source=alerts&nr_email_referer=1#ixzz1oSKthOke
Via www.youtube.com

One comment on “Obama Protesting at Harvard in 1991 Watch how a President is Born.”