Posted by wcntransmedia on March 5, 2012
Posted in: Uncategorized. Leave a comment 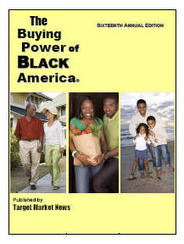 Most of top 25 advertisers in Black-oriented media are increasing spending (February 15, 2012) In the first of a series of occasional reports, Target Market News has examined data on the advertising expenditures of the top advertisers in Black-oriented media and found that the overwhelming majority are increasing their budgets.   This rise in spending may be part of a strategy to be more competitive in the $800 billion African-American consumer market as the U.S. economy continues to improve.   “While we are not yet seeing a significant increase in the number of major corporations targeting the Black consumer, there is growing activity among those companies that are already doing so,” said Ken Smikle, president of Target Market News. “Ultimately competition for increased market share may change the playing field as more firms look for growth opportunities.”   The total spent by the top 25 advertisers in Black media increased by 4.3% from $556.4 million to $580.8 million.
Via targetmarketnews.com