Posted by wcntransmedia on December 8, 2011
Posted in: Uncategorized. Leave a comment 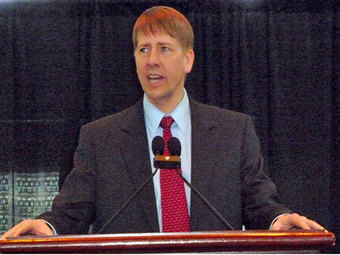 The Senate was unable to reach the 60-vote threshold to override a Republican filibuster on the nomination of Richard Cordray to be the first director of the Consumer Financial Protection Bureau in a 53 to 45 vote Thursday morning, with one Senator voting ‘present.’The White House launched an all-out blitz to get Cordray confirmed, targeting key Senators in their home states with media calls and interviews — but that wasn’t enough.   Republicans say the agency lacks sufficient congressional oversight — particularly over how it spends its annual budget — and many are fundamentally opposed to an agency that will serve as a regulator for banks and other financial institutions.   The vote stands to become an issue in the 2012 campaign, with the White House making the push for the consumer protection agency a central component of its “fair shot” message. Obama has said that without a director the agency cannot effective carry out it’s mission — which Republicans say is precisely the point.   Obama will make a statement on “Republican obstruction of Richard Cordray’s nomination to head the CFPB” at 11:30 this morning, the White House announced.   Please follow Politics on Twitter and Facebook.
Follow Zeke Miller on Twitter. Read more: http://www.businessinsider.com/obamas-pick-for-the-new-consumer-watchdog-agency-was-just-blocked-by-the-senate-2011-12?utm_source=alerts&nr_email_referer=1#ixzz1fxbmao00   WCNTV Commentary:  Isn’t it clear that Nothing is going to get done in the House of Senate for 11 Months.  Who has time to waste.  The President needs his lawyer standing by because this right here is obsence.  We understand that the opposing parties are supposed to point out differences and even argue tooth and nail.  But this is a plan and #OWS understand that taking to the streets may be exactly what the powers that be have in mind.    We need to Ocuupy Solutions and NOW.  Not sure how much power there is in the Executive Branch but Obama’s Attorney’s do.  Get that Box of Pens out Sir and lets get busy saving this nation.  Over 100 days ago we lost our credit rating that could have been avoided by Executive Order.  Its time to get a little more Bernie Mac in you sir.  Nice is no longer an option.  You are at War within what should be TEAM AMERICA.
Via www.businessinsider.com