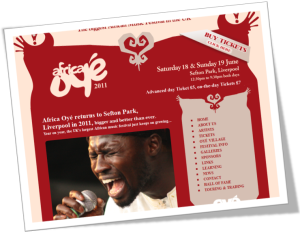 Africa Oyé returns to Sefton Park,
Liverpool in 2011, bigger and better than ever.
Year on year, the UK’s largest African music festival just keeps on growing… 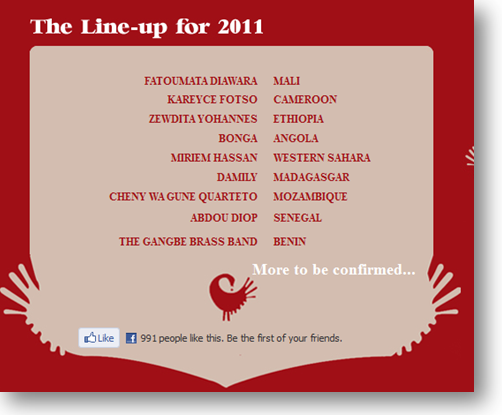 WCN Transmedia Celebrates the career and accomplishments of George E. Curry, Veteran Broadcaster, and Advocate for Diversity in Media.

George E. Curry is a journalist, keynote speaker, moderator and media coach.  From 2001 until 2007, he served as editor-in-chief of the National Newspaper Publishers Association News Service in Washington, D.C. Curry’s work at the NNPA ranged from being inside the Supreme Court to hear oral arguments in the University of Michigan affirmative action cases to traveling to Doha, Qatar to report on America’s war with Iraq, accompanying Southern Christian Leadership Conference (SCLC) President Charles Steele on a mission to Torino, Italy to institutionalize the concept of non-violence and traveling to Accra, Ghana to cover the 50th anniversary of that nation’s independence.

Curry writes a weekly syndicated column for the NNPA and “Beyond the Spin,” a column for the Philadelphia Inquirer. Before joining the NNPA, Curry was editor-in-chief of Emerge magazine for seven years. He is past president of the American Society of Magazine Editors, the first African-American to hold the association’s top office. Before taking over as editor of Emerge, Curry served as New York bureau chief and as a Washington correspondent for the Chicago Tribune. Prior to joining the Tribune in 1983, Curry worked for 11 years as a reporter for the St. Louis Post-Dispatch and for two years as a reporter for Sports Illustrated.

Under Curry’s leadership, Emerge won more than 40 national journalism awards. He is proudest of his 4-year campaign to win the release of Kemba Smith, a 22-year-old woman who was given a mandatory sentence of 24 1/2 years in prison for her minor role in a drug ring. In May 1996, Emerge published a cover story titled “Kemba’s Nightmare.” President Clinton pardoned Kemba in December 2000, marking the end of “Kemba’s Nightmare.” A movie based on her life story is scheduled to be released in 2009.

Born in Tuscaloosa, Alabama, Curry graduated from Druid High School of that city before enrolling at Knoxville College in Tennessee. At Knoxville, Curry was editor of the school paper, quarterback and co-captain of the football team, a student member of the school’s Board of Trustees and attended Harvard and Yale on summer history scholarships. While working as a Washington correspondent for the Chicago Tribune, he wrote and served as chief correspondent for the widely-praised television documentary, “Assault on Affirmative Action,” which was aired as part of the “Frontline” series on PBS. He was featured in a segment of “One Plus One,” a national PBS documentary on mentoring.

We lift up Role Models Like George Curry who has the influence and wisdom to provide equal access via broadband and access to a new Transmedia Story.  It may be time for us to remember to go forward.

After delivering the 1999 commencement address at Kentucky State University, he was awarded a Doctor of Humane Letters degree. In May 2000, Lane College in Jackson, Tenn. also presented Curry with an honorary doctorate after his commencement speech. Later that year, the University of Missouri presented Curry with its Missouri Honor Medal for Distinguished Service in Journalism, the same honor it had earlier bestowed on such luminaries as Walter Cronkite, John H. Johnson, Joseph Pulitzer and Sir Winston Churchill.

Curry’s work with aspiring journalists has not been limited to the United States. He has conducted journalism workshops for teens in Germany and in 1995 he directed a program that brought together college students in the U.S. and those studying journalism in Senegal to produce two newspapers for the African/African-American Summit in Dakar, Senegal. His work in journalism has also taken him to Egypt, England, France, Cuba, Ghana, Nigeria, Mexico, Canada, and Italy.

He is chairman of the Knoxville College Board of Trustees, and serves on the Board of Directors of the Kemba N. Smith Foundation, St. Paul Saturdays, a leadership training program for young African-American males in St. Louis; and Young D.C., a regional teen-produced newspaper. Curry was also a trustee of the National Press Foundation, chairing a committee that funded more than 15 workshops patterned after the one he directed in St. Louis. Curry is a member of the National Speakers Association and the International Federation for Professional Speakers. His speeches have been televised on C-SPAN and reprinted in Vital Speeches of the Day magazine.